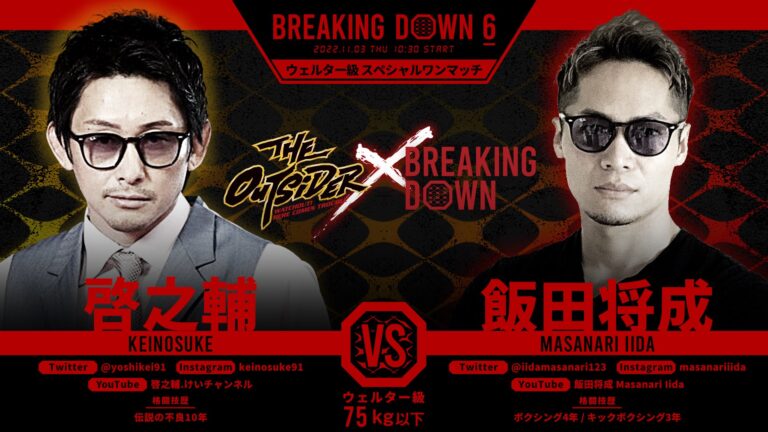 My name is Muteki Jellyfish and I am a martial arts enthusiast.

Although I myself am weak, I have a reputation for guessing the winners and losers of martial arts fights.

My accuracy rate is about 80%.

Until now, I just enjoyed predicting the outcome of fights.

However, I have recently learned that it is possible to bet legally.

I have a website called BET CHANNEL where you can bet on domestic and international sports and other events.

So, I am thinking of using my talents to earn a good amount of money.

My target this time is Breaking Down 6, which will be held on November 3.

It is an entertainment event produced by Mirai Asakura and is getting a lot of buzz.

Since many of the contestants are amateur brawlers, it is easy to identify their "weak points". They are heckling in punching, or neglecting their defense.

Since these are movements that would be unthinkable in a professional fight, it is easy to tell in an instant if a fighter has not mastered these areas. In other words, such players are easy to lose.

The following is an explanation. 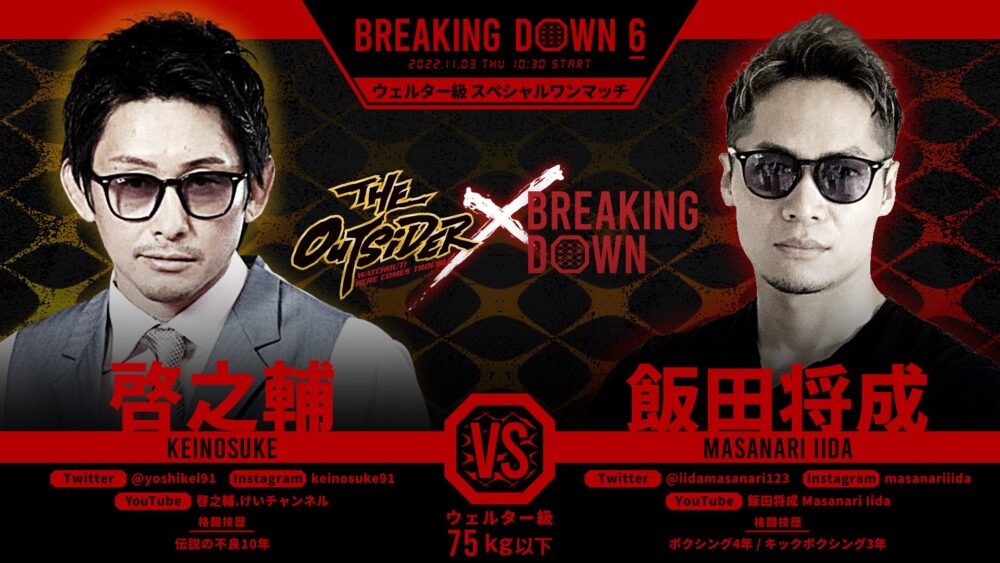 The card that will probably be the main card is "Masanari Iida vs Keinosuke".

Betting Channel odds are dominated by Masanari Iida (as of October 30).

You can see Masanari Iida's previous matches and practice sessions in the video above.

In a normal match, he closes the distance by stepping in sharply after pulling back a little to see what is going on.

However, in the one-minute rule of Breaking Down, he doesn't back down, but matches a counter kick. I guess it's called the later. Well applied.

Under the breaking down rules, points will be deducted if you fall back or use fewer moves, so it is important to just move forward. Masanari Iida seems to understand this as well.

He used to be a ranked boxer, so he seems to have a good sense of guessing and power.

Nikken-kun even honestly admits the difference in ability, saying, "My opponent was too strong".

His kicks are quite sharp, although he seems to have taught himself. I feel that he has excellent athletic skills. He can do anything. His grip strength seems to be about 80kg.

He is also stoic, banning YouTube activities for a while until the match.

On the other hand, I would like to talk about Keinosuke.

Keinosuke has the better knee.

Last time I was at Breaking Down 5 with Mohan Dragon.

Again, we are building around knees. He uses a front kick to keep his distance, and when he comes closer, he uses a knee. I guess he finishes with a high kick.

I got the impression that his punching was not very good. And his movements are generally a little slow.

As per the odds, I too predict a win for Masanari Iida.

If Masanari Iida had only boxing experience, I think it would have been a good match.

However, he has experience as a kick boxer, and he is likely to be able to handle Keinosuke's footwork because of his talent.

If they get up close, Masanari Iida has the advantage in punching, and he has a lot of hands, so I expect him to win by KO or decision. 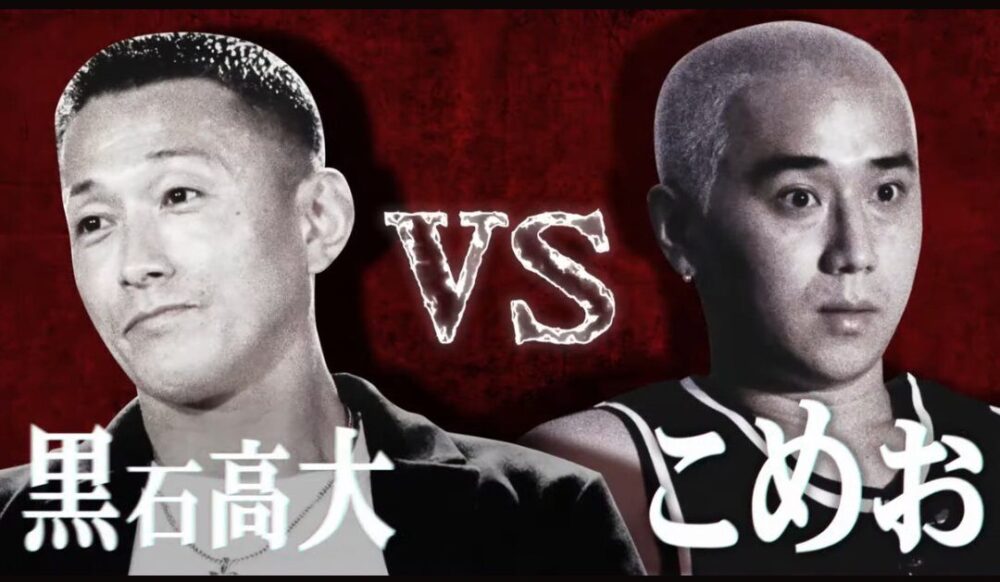 "Komeo," the fighting chef who became famous on Breaking Down, and "Meitaka Kuroishi," a former outsider who is now an actor.

The odds are slightly in favor of Komecho (as of October 30).

Komeo, as a character, is top-notch. He may be the one who made Breaking Down famous by leaps and bounds.

He was such an impactful character.

However, his ability is.... He is an amateur.

The most recent Breaking Down 5.5 match.

He is repeating the "Denden Drum Punch" which has no pull or anything.

He doesn't seem to have good dynamic vision, and I think he is a very weak category.

This is Takai Kuroishi's record.

He was featured on Wednesday's "Downtown" and has a strong image of instantaneous KO defeat, but his record is quite impressive.

He has beaten some famous names and seems to have been quite good at it.

He has been retired for 7 years, but it is possible that he continues to work out because of his acting career.

From what I saw of the fights at that time, he seems to be stronger than Komeo by all accounts.

I can't imagine that Komeo will win.

I think it would be better if the match turned into a mud fight with too many moves, and Komeo won by decision just in time.

Perhaps, Kodai Kuroishi would land an effective strike, and Kome-Choice would involuntarily turn his back, spin around, and fall back. After a few more times of this, I expect Kodai Kuroishi to win by KO or decision.

The odds were slightly in favor of Kome, but I'm betting $10 on Kodai Kuroishi!

This is a tasty matchup in terms of odds! 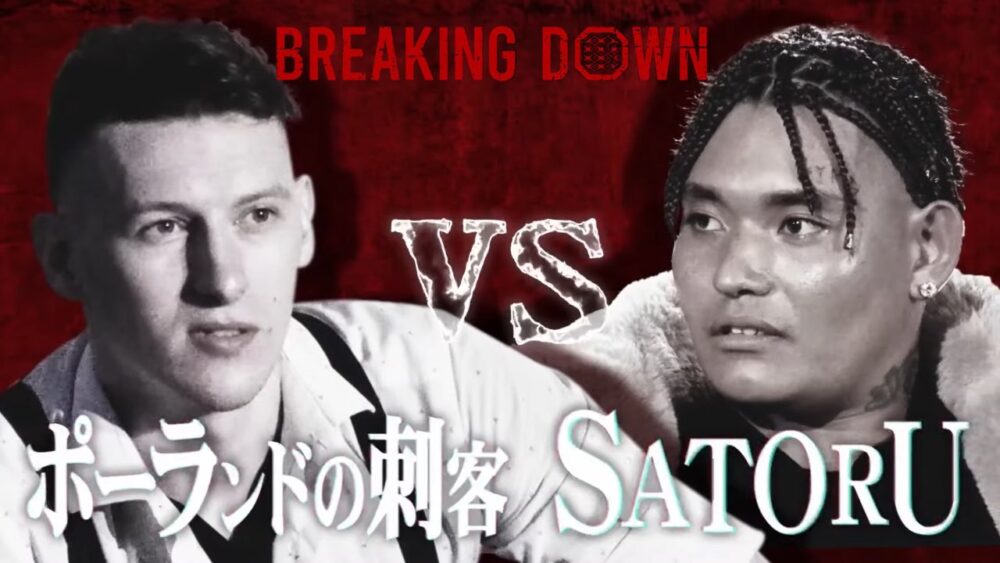 This card features Poland's assassin, Hoynacki Pavew, and the winner of the KENKA BATTLE ROYALE, SATORU.

Odds favor the Polish assassin considerably (as of October 30).。

About the Polish Assassins

Here is the latest sparring video of the Polish assassin.

He is having a good match with former K-1 champion Anbo, despite the class difference.

As expected, he is overwhelmed by effective strikes and speed, but I think he has a different level of strength in breaking down just by being able to stand for 3 rounds.

He can return punches immediately after being hit and seems to have a strong heart.

The final match of the fight battle royale. Here is a video of the match with Bann Nakamura.

Bann Nakamura is 45 years old. I don't think he has that much martial arts experience.

If he can't KO his opponent, he is at the bottom of his game.

His punches are large and his timing is easy to see. He does not seem to have much physical strength.

This is one choice for the Polish assassin.

I may bet all my money on it.

I am so worried about SATORU player's body.

These are the forecasts that we expected to win for sure.

Thank goodness for that.

*All bettors are responsible for their own bets.